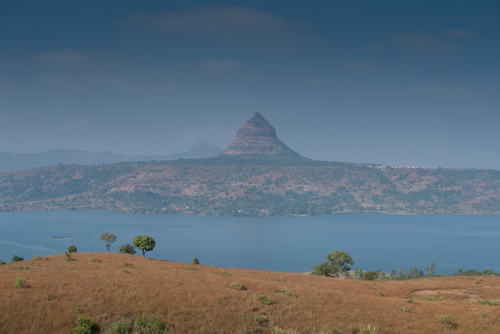 Tung across Pavna
Amey (mama) and me have been talking about going for some weekend trek for quite some time now. So we decided we will go to Tikona, which is a simple trek and easily accessible. Mama and Mami were to leave from Mumbai early and we were to meetup at Lonavala.
Ani was here so he decided to come with me. Mama called me up from Panvel at about 0630hrs. We got up got ready and were on the road at 0800. It was pretty cold and there was no sign of the sun. The roads were empty and we had a fast ride to Lonavala. At Ramkrishna, where the couple was waiting, we had hot idli-wada sambar and chai and headed on to Tikona.
Tikona is at the back side of Lohagad-Visapur. The road passes alongside the Pawna waters. I do not think even an inch of the hillside is free land - all fancy bungalows and estates of the rich. It is pretty sad.
As we neared Tikona we came out of the playground of the rich into the poor people's world. heh. Passing the base village we had to ride about a kilometer of dirt track to get to the point at the base of the fort from there is a trail up.  There were several bikes and a couple of cars parked. This being a easy trek and near Pune and Sunday lots of people around.
It was a easy trek. Nice weather. Just before the final climb, near the Taljai mandir, I felt a little uneasy about by breath and stopped. (I was climbing with the help of doxofilline anyways hehe) .. The rest did the 20 minute steep climb and came down in an hour having explored the top.
We had decided to cook our own lunch. It is so much fun. I got the stove and the pots, Mama got the rice and the 'kulith'. He made 'kulithache pithle'. Hot rice and hot pithle was awesome.
After washing up we headed down. At the base village we split having said good byes. We had just realised that we were pretty near Pune from interior roads. We were about 18km away from Paud which connects directly to Chandani Chowk and is about 20km away.
The road upto Paud was in pretty bad shape but passed through some excellent countryside, again full of large estates.  From Paud it is a good road right up to the NH4.  We made some good time and had reached Warje in about 90mins.
In all a small but enjoyable trek. Need to do this more often. The fresh air and the open sky does good to one's soul. 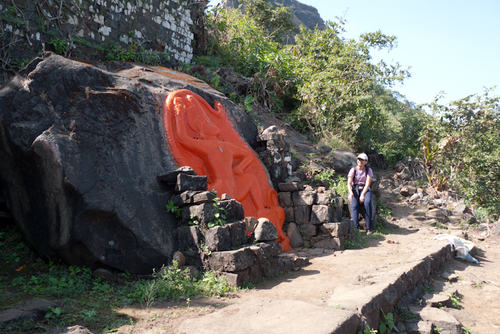 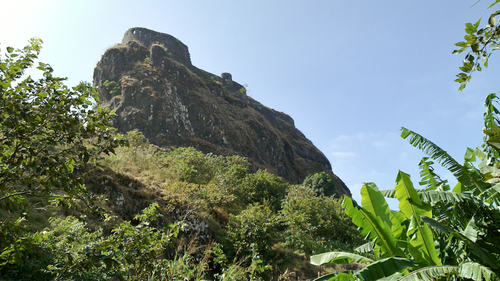 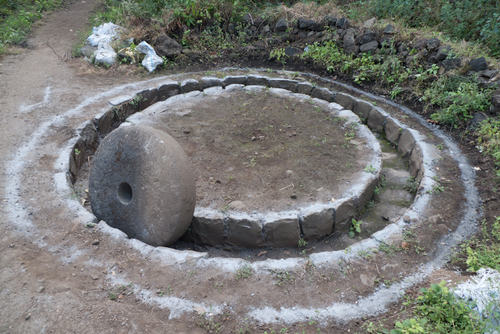 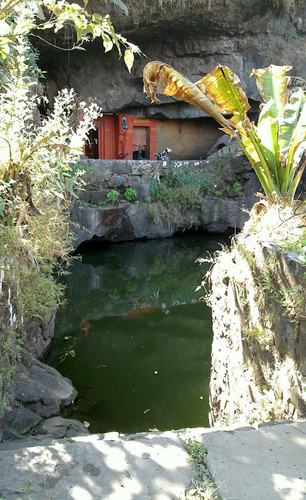 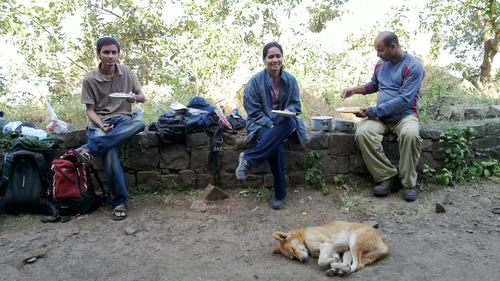 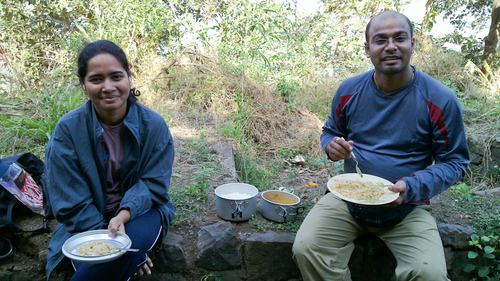 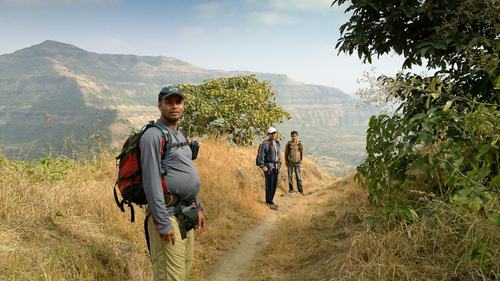 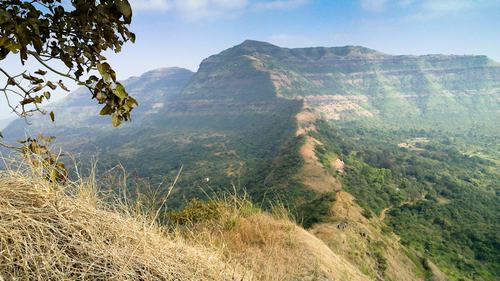 Posted by Abhijit Rao at 9:52 AM. 8 comments
Harishchandragad

Harishchandragad, From Pachnai
We had been planning this trek for quite some time. Finally come November we did go. 11th Thu to 13th Sat. What an amazing experience it was, for the nine of us. A lucky trek. A happy trek. Full of fun and relaxation.
We decided to go in our own cars so Sumedh and Anurag got theirs from Mumbai. We left early morning on Thursday. Had breakfast at an unholy early hour near the University and then headed on. The drive was nice but long. From Ale fata we took a left going towards Malshej and then at Otur got off the highway onto a small road. From Rajur we were headed for Pachnai - a small hamlet at the base of the gad. It was pretty far away with the road in pretty bad shape. Pachnai is the dead end village. This region is pretty remote.
At Pachnai we packed up and headed up the Gad. We climbed slowly and with lots of fun and frolic. Sumedh and Percy were fully loaded (as was Mrugesh) ... but their spirits were high. The weather was fantastic with the sun being very mild and intermittent. At the Gad we scouted for a cave and got the one I had stayed in last. The village boys had set up a camp in half the cave - they ran some sort of highland wild hotel up there, from the cave front.
We settled down and started making preparations for dinner and a thunderstorm hit us. Visibility went down to almost 1-2 feet - it was a complete white out. The lightening was so near that it lit up the whole cloud. We had just missed getting stranded out in this storm. Lucky us.  Dinner was rice and batata rassa bhaji.  We all ate up and hit the hay .. err .. stone.
Next day was a beautiful day with light clouds enveloping the Gad now and then. We all had a lazy tea and headed for the Konkan Kada. What a memorable time we had there. We were in the clouds most of the time with glimpses of the kada.  Then the clouds cleared for some time for us. The kada is nature's magnificence.  We had a lazy walk to one end amongst the grass and the wild flowers. No one wanted to leave. But we had left Percy and Mrugesh with the baggage and had to relieve them.
We came back and had Bhurgi and bread for lunch. Then Percy, Mrughesh and Sumedh left for the kada. The rest of us lazed around. At night that day we had a nice bonfire. Sang songs. Had small talk. Relaxed. Dinner was bhaji yukt maggi.
Next morning was leaving time. Had some hot chai. Packed up and left at a comfortable time. The journey down was even more leisurely than the one up. We had so much fun.  At the base there is a house which is sorta a hotel. We ordered lunch there of bhakri and pithle ... Relaxed. Talked. Ate. While we were eating a thunder storm hit us. Very heavy rain from about 45mins. Lucky us. :) We could get into the cars dry, to leave. The drive back was long. We took a less used road which was pretty bad but showed us the interior parts of this region. Amazing countryside.
We reached Pune pretty late. All buggered out. But happy. It was one of the most fun relaxing treks I have been on.  Thanks to everyone, Him and His weather. 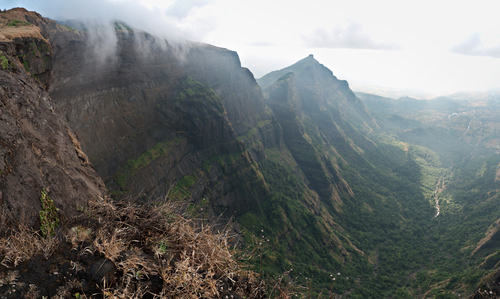 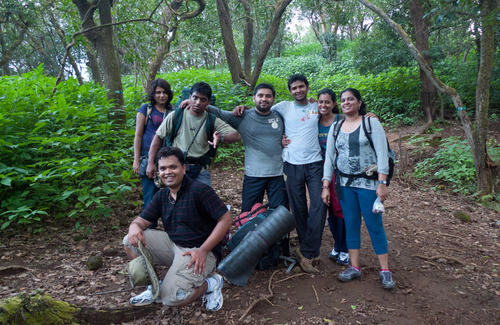 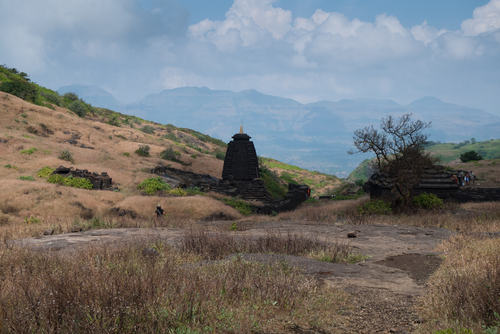 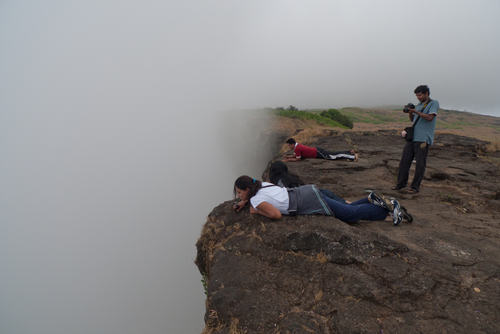 At the edge of the Kada 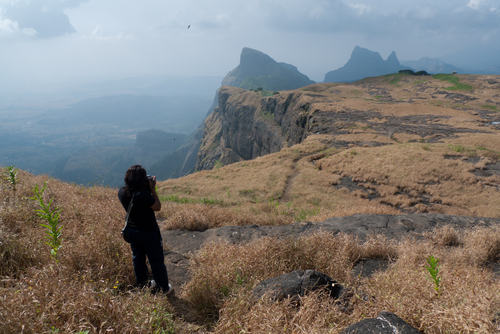 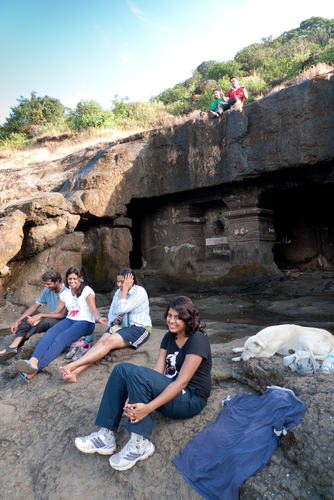 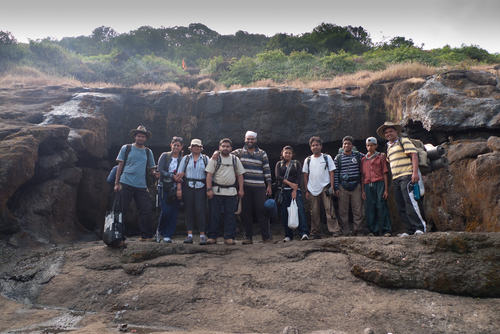 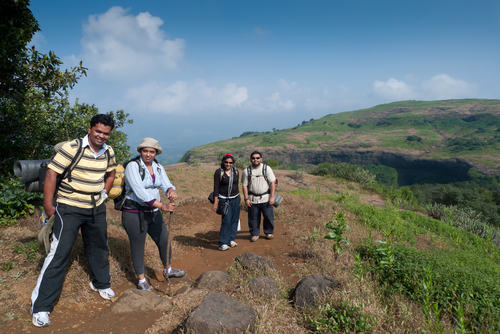 All ready to start the descent 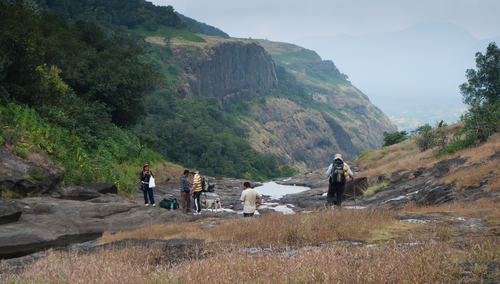 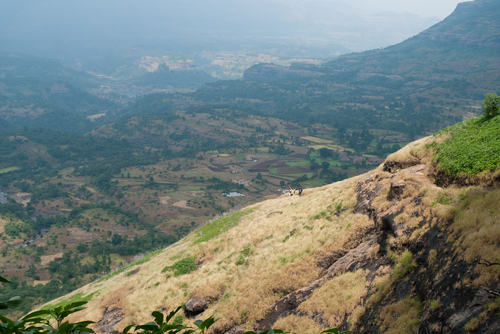 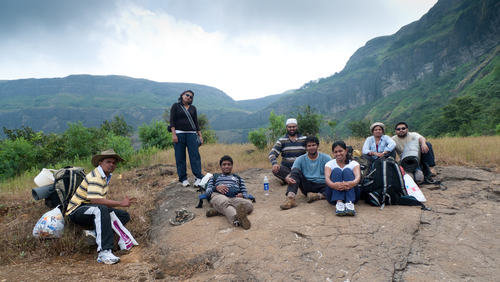 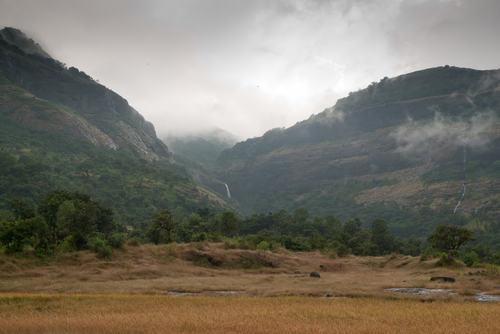 The path is through this narrow valley

Posted by Abhijit Rao at 4:31 PM. 4 comments
The Road Not Taken 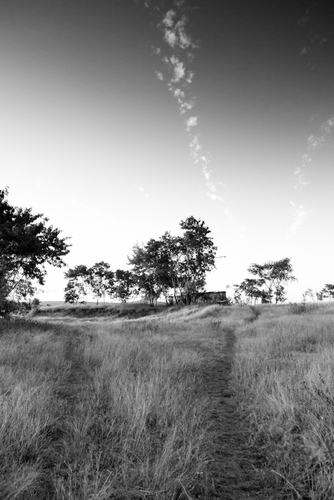 The Road Not Taken Two roads diverged in a yellow wood, And sorry I could not travel both And be one traveler, long I stood And looked down one as far as I could To where it bent in the undergrowth; Then took the other, as just as fair, And having perhaps the better claim Because it was grassy and wanted wear, Though as for that the passing there Had worn them really about the same, And both that morning equally lay In leaves no step had trodden black. Oh, I marked the first for another day! Yet knowing how way leads on to way I doubted if I should ever come back. I shall be telling this with a sigh Somewhere ages and ages hence: Two roads diverged in a wood, and I, I took the one less traveled by, And that has made all the difference. ~ Robert Frost